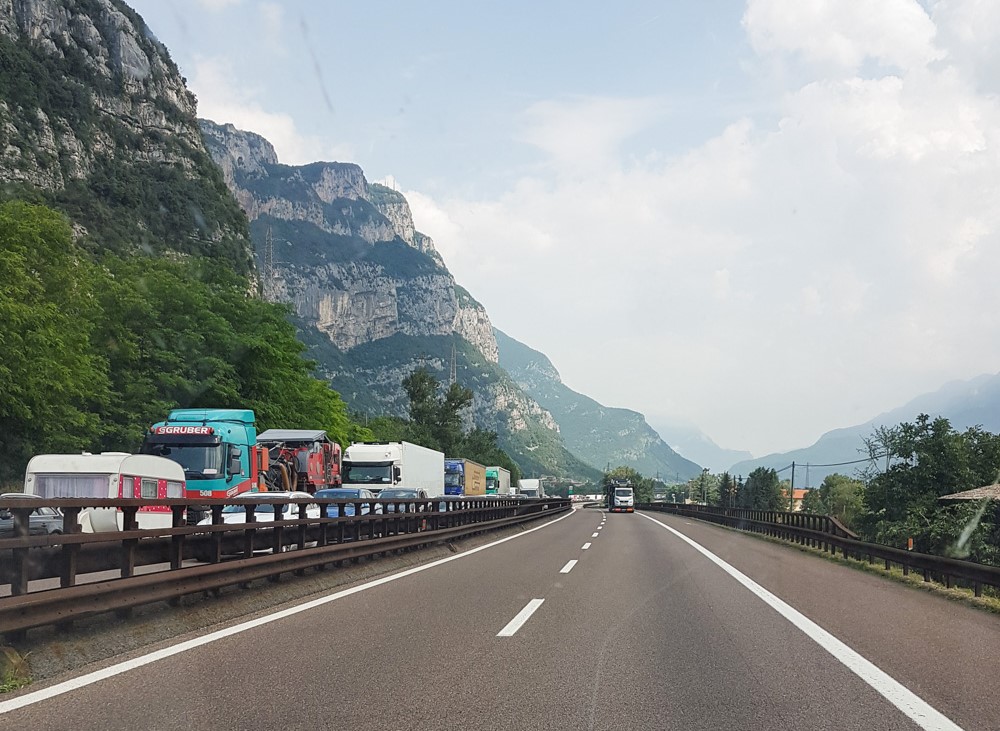 Lake Garda to The Dolomites

This is the part of the roadtrip that I was the most excited about – I love mountains, so heading further north to the Italian Alps got me so excited for what was to come over the next few days. Little tip – if you’re heading to the mountains in Italy, don’t listen to how long Google Maps says it will take you – we learned to basically add another hour or so to the time in the end!

The drive was absolutely stunning, but we did hit a bit of traffic on the way out of the Lake Garda area. We were at a standstill at a highway toll booth for a good 30 minutes or so as it turned out there’d been a massive multi-vehicle accident on the other side of the highway and so everyone was stopping to take a look as they drove past on our side. Once we got past all of that, the majority of the journey was on the highway and was fine. 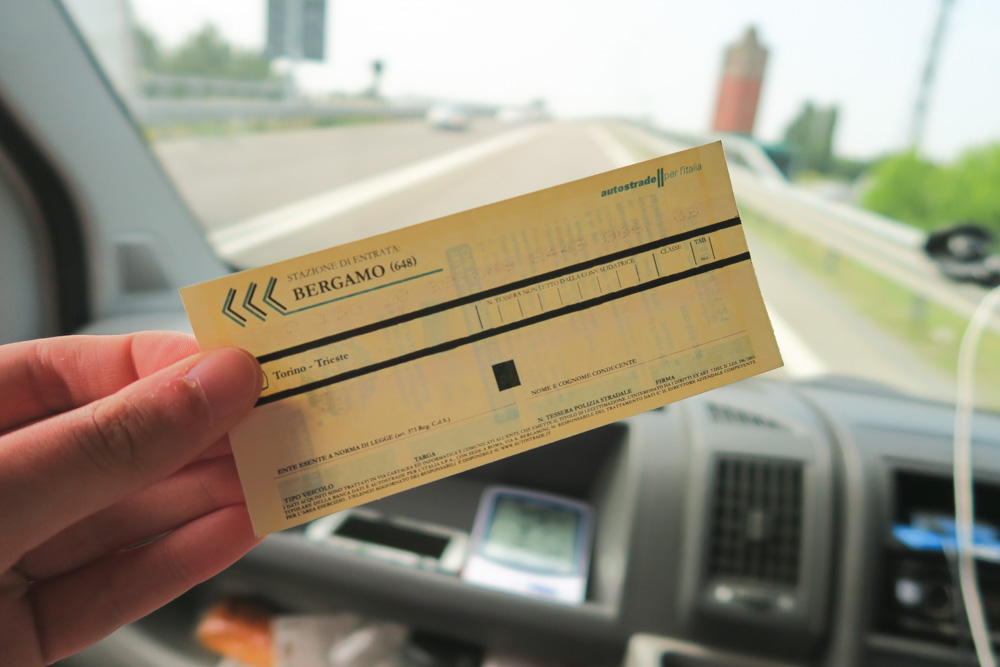 Driving on the Autostrade (Italian Highway)

As terrible as the Italian roads are, their highways are kept in a lot better condition (as you’d hope since you’re paying to use them). They’re pretty simple to use! The autostrade roads are indicated by a green sign – if you’re not on the highway and you follow the green signs, you will end up at the autostrade. Once on the autostrade, the signs remain green. If it looks like you’re on the highway, but the signs are blue, then you’re just on a larger road without tolls.

To enter the autostrade, you must collect a ‘biglietto’ – a ticket. They’re such oldschool style tickets which I wanted to keep as a little souvenir, but they are kept when you leave the autostrade. The ticket is printed with the details of the entry point.

When driving on the autostrade, you must keep to the right at all times unless overtaking. Some lanes actually have minimum speed limits, so beware of those! They are signposted by a blue speed sign with the higher speeds further left. If you’re not doing those speeds, stay out of those lanes! We noticed that this wasn’t through all points of the highway, only sections of it. The speed limit for the autostrade in Italy is 130 km/h (80mph), but follow the signs for any changes.

To exit the autostrade, you simply take the exit you need and go to a toll booth (don’t go to the Telepass area unless you have an electronic Telepass to be charged to) and hand over your ticket to the person at the booth. The tolls weren’t too bad in price – I think the average for us was around €10 for a couple hours driving, which I think would be cheaper for a car. 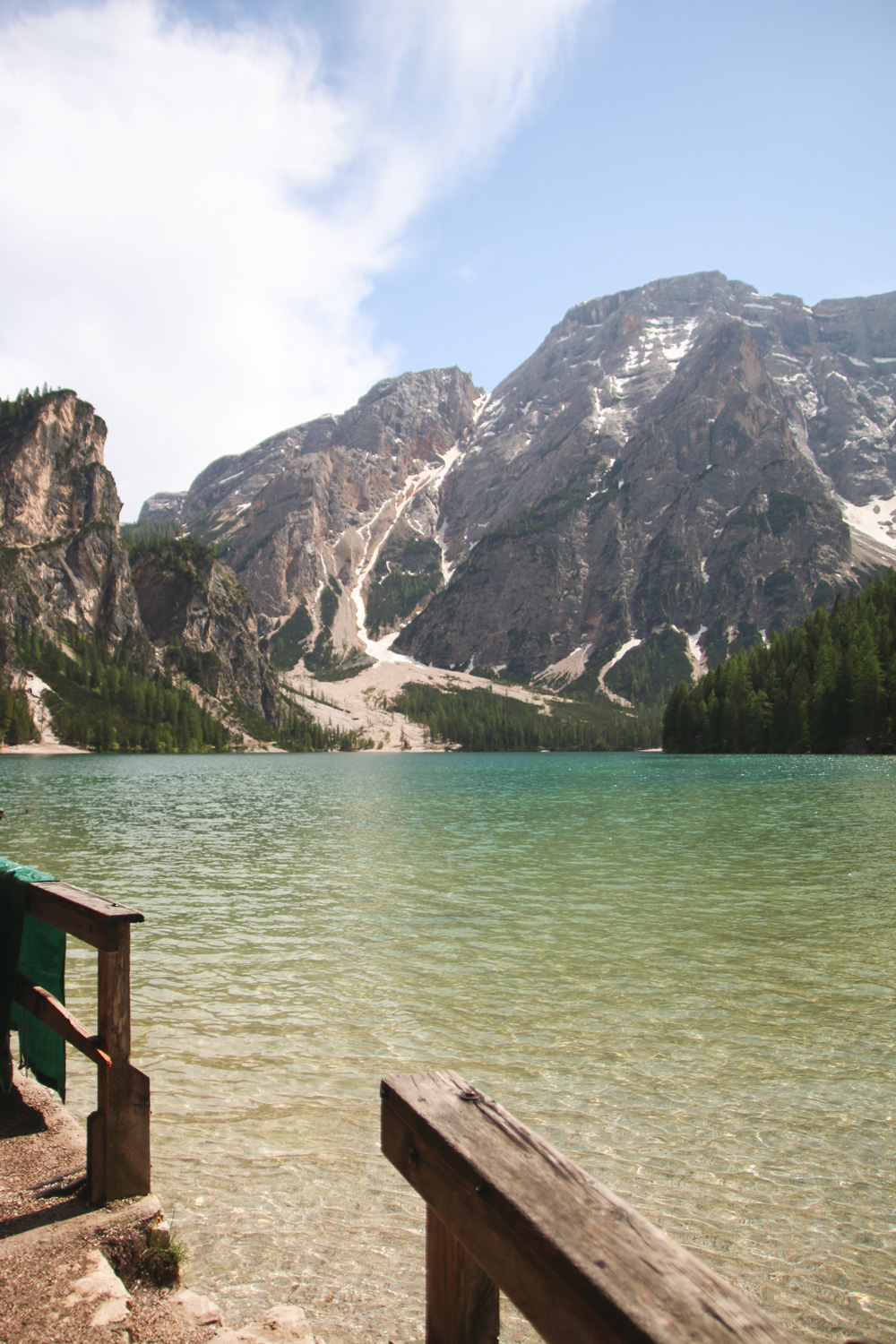 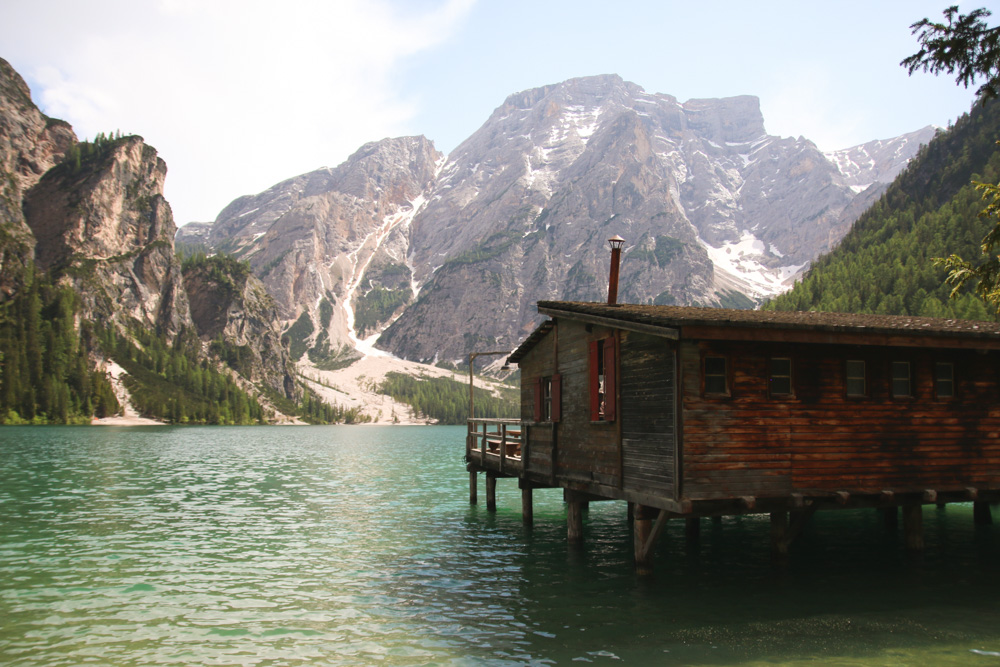 We arrived at Lago di Braies (also known as Pragser Wildsee in German) in the afternoon and parked up in the carpark right at the entrance to the lake (closest to the hotel) – we wouldn’t recommend parking here as it was SO expensive for a van (I can’t actually remember how much, but I’ve read online it’s around €12, though I’m pretty sure we got charged for 24hrs which was more expensive). We stayed for an hour or two, and this was one of the most expensive car parks of the entire trip and we were so shocked when we left.

There are carparks further down the road away from the lake (some are literally a 5 minute walk away) which either looked free or cheaper and weren’t barrier entry/exit. So we’d advise to check those out first if there’s any spaces free.

We arrived to rain and thunder, so we chilled in the van for a while and had a quick lunch of bread and cheese as we could see clear blue skies appearing in the distance. 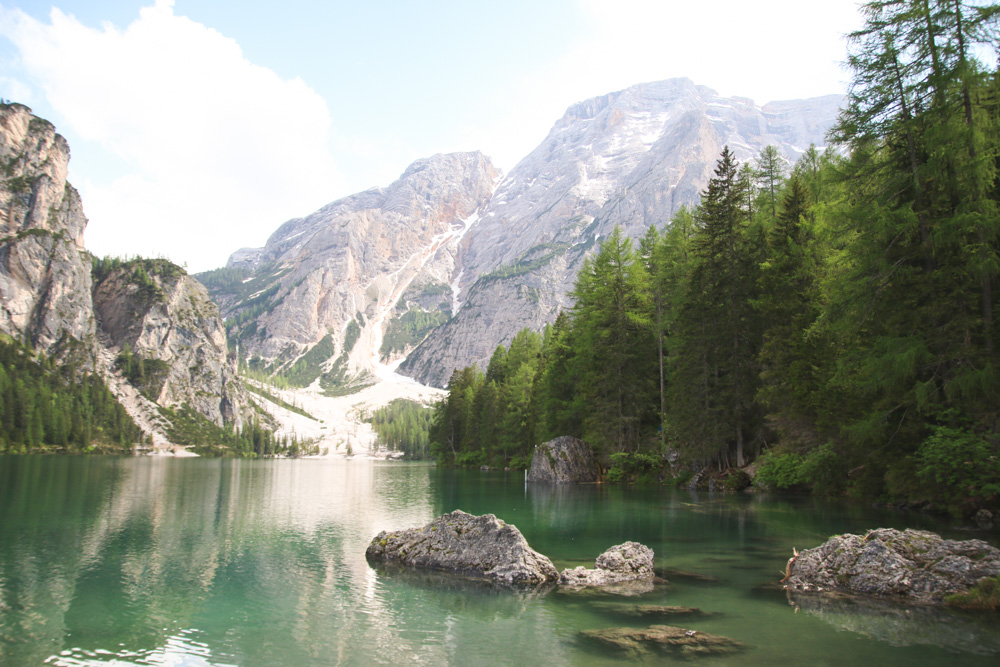 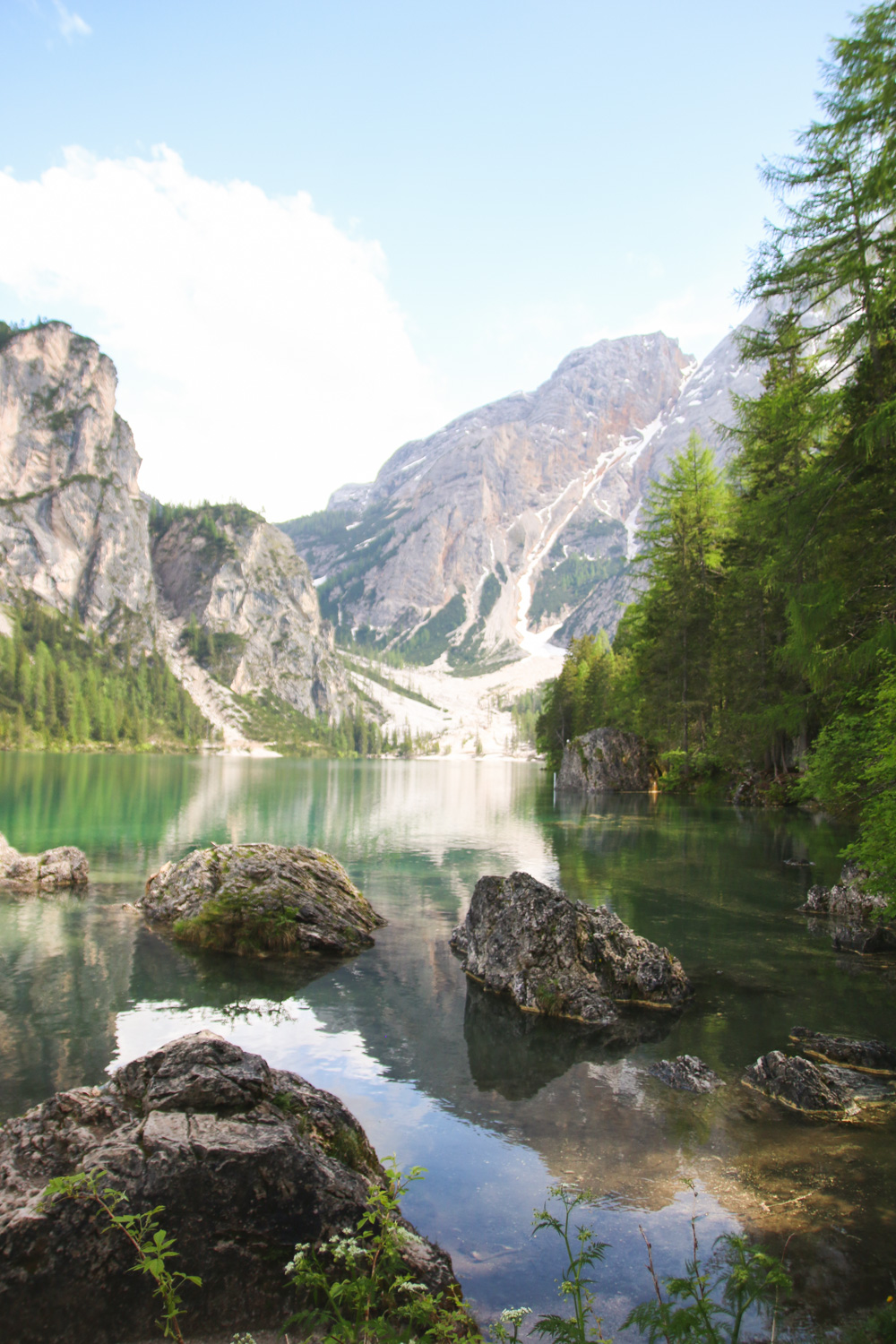 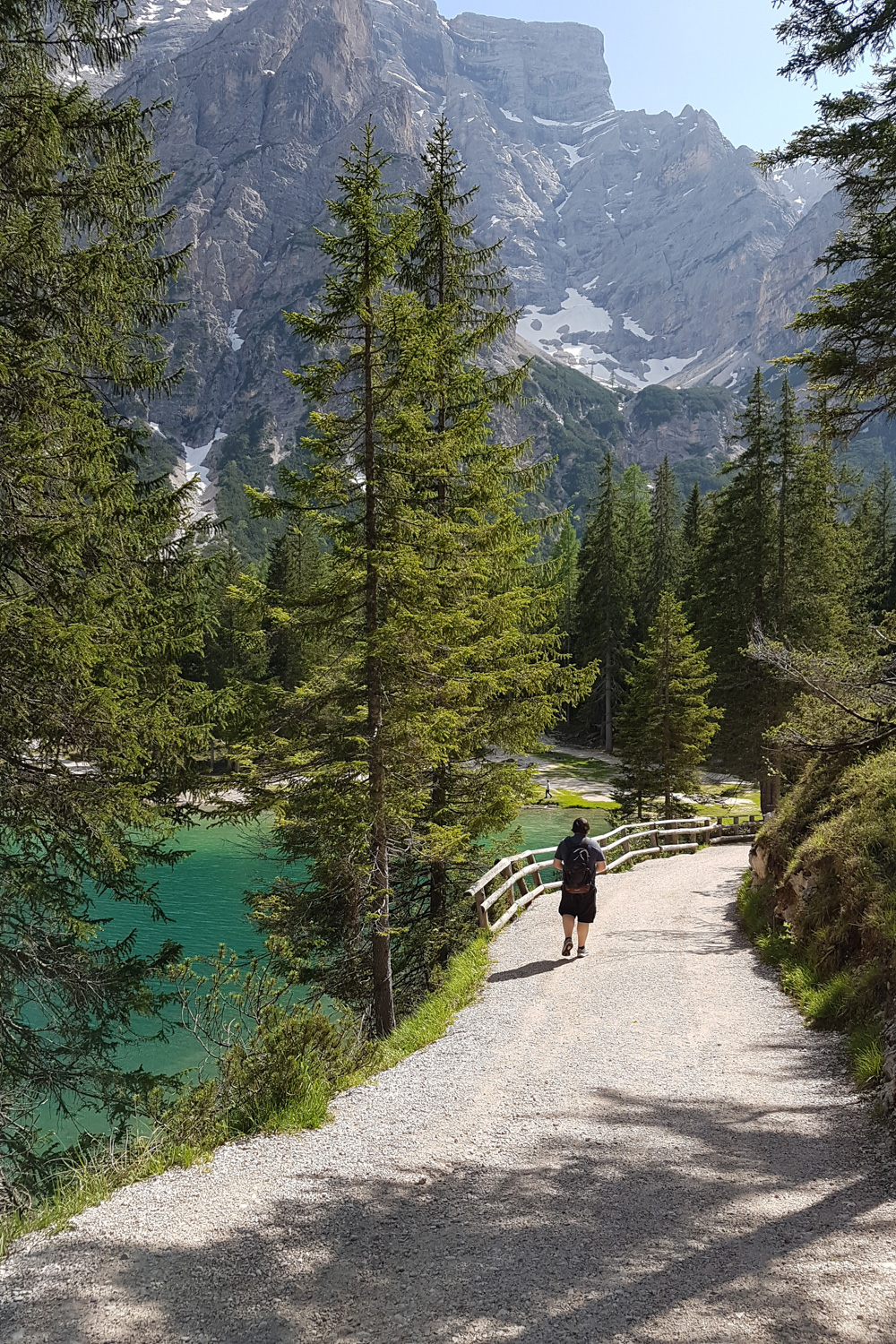 The lake was really stunning! The water is crystal clear and appears a lovely greeny turqouise colour with mountains towering around it. The lake is well known for it’s little boathouse where you can sometimes hire boats to take out onto the lake, but as our luck would have it, there was a movie being shot there that day, so the boathouse was off limits (and as it turns out, most of the path around the lake was too). We, along with the majority of other tourists hopped around the barrier to get that famous shot of the boathouse, before being ushered away by the director.

There was also quite a bit of construction work going on at the time, so a lot of the path on the other side of the lake (between the boathouse and the landslide at the back of the lake) was closed off anyway. People were still walking along it and obviously just ignoring the signs, but as we got there a group of hikers were being ushered back so we had to turn around and walk back the way we came! It was a bit annoying having so little of the lake accessible, but what we did get to see was stilll absolutely stunning! 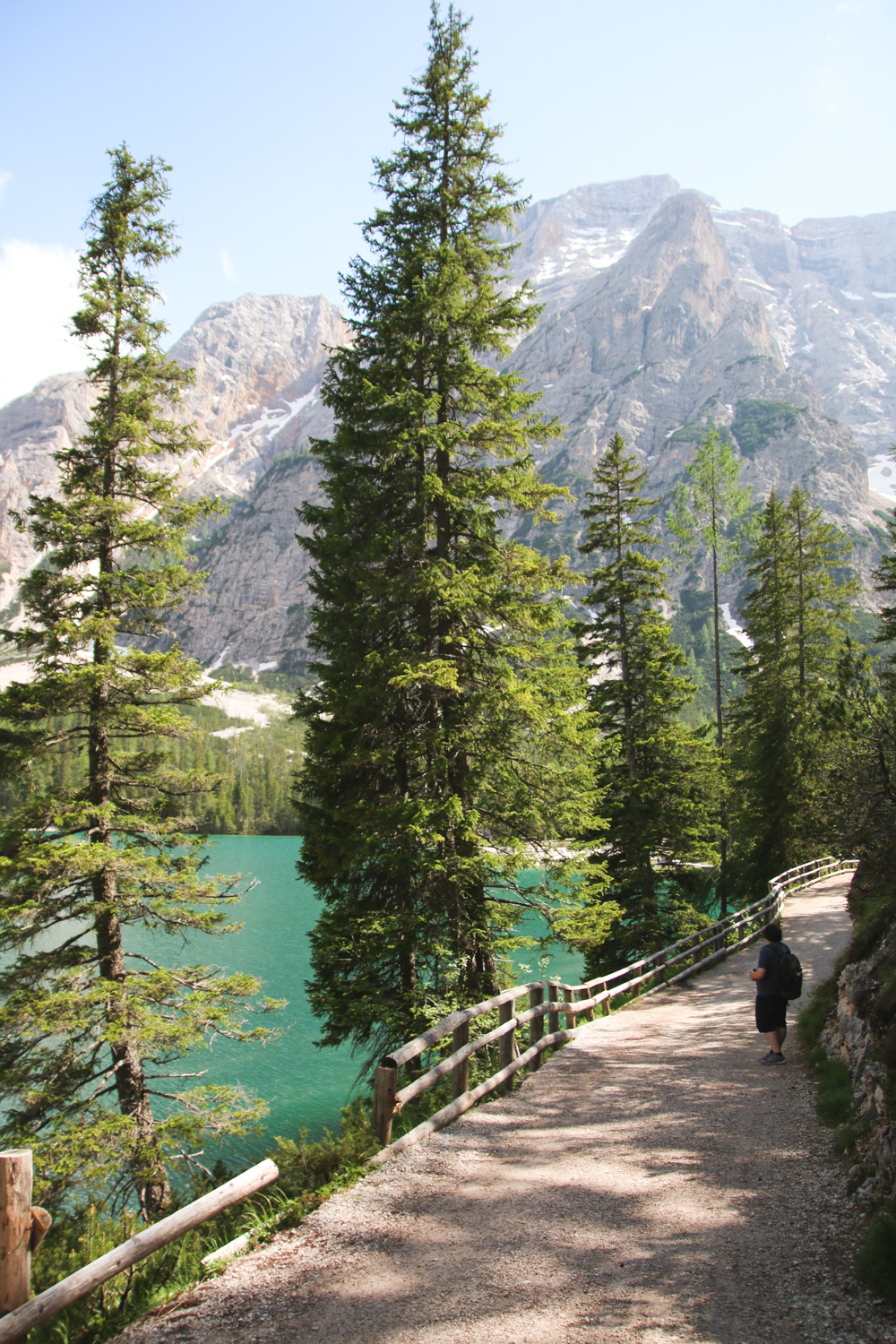 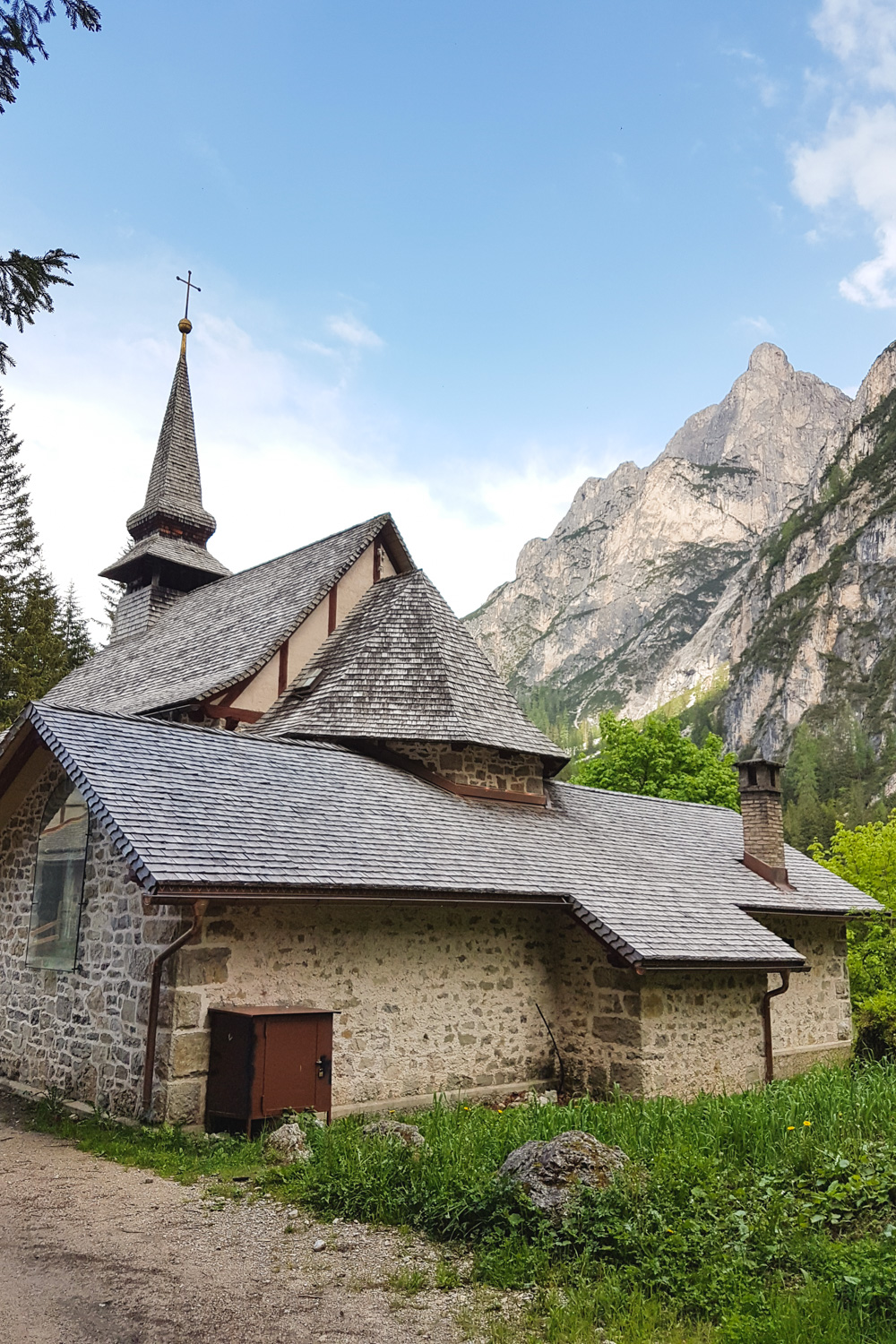 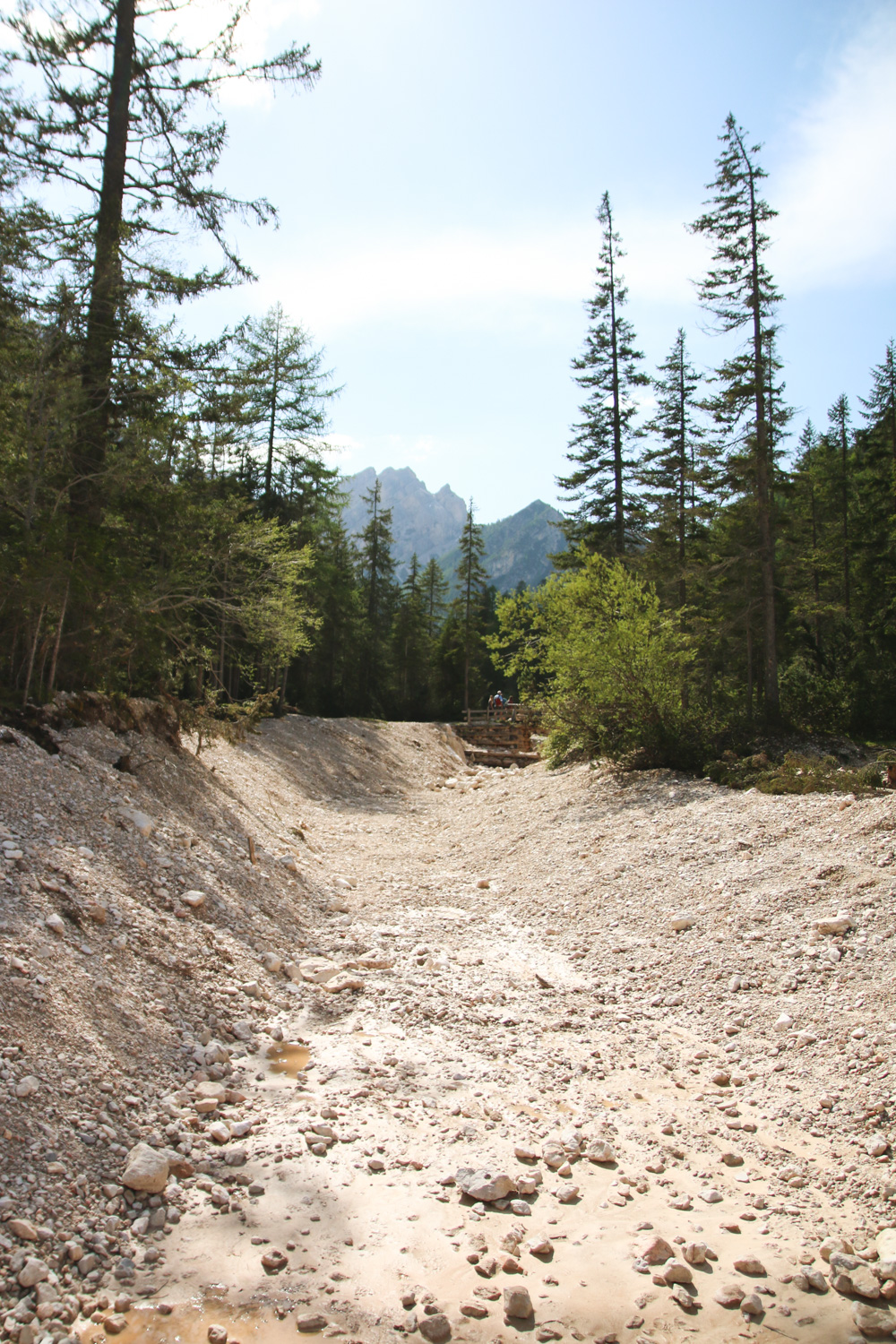 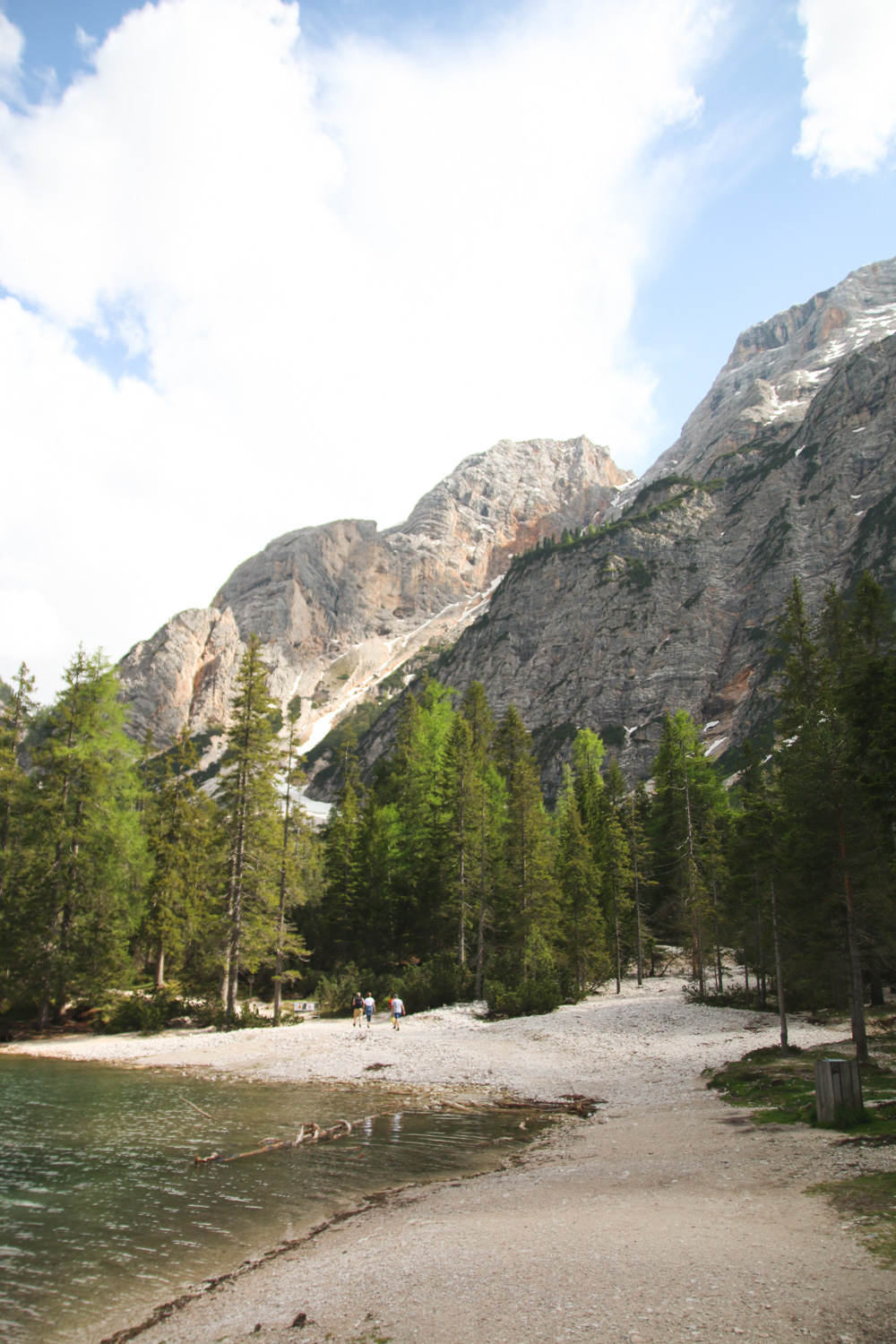 We stayed at a campsite about 20 minutes from the lake. It seems like most of the campsites in this area of the Dolomites/Italy are really good quality campsites. Most have private bathrooms for hire, a heated swimming pool, laundry and drying facilities, supermarket, and bike hire and are open all year round. As we were almost halfway through our trip at this point, we had quite a bit of laundry to do and were in need of a good wash so this was perfect for us.

We stayed at Camping Olympia for the night, and the facilities were so so good! It was probably one of the nicest campsites in terms of cleanliness and facilities that we stayed at the whole trip. After our night’s stay here, we were ready to head off into the famous mountains of the Dolomites – Tre Cime di Lavaredo! I’m so excited to share that blog post next! 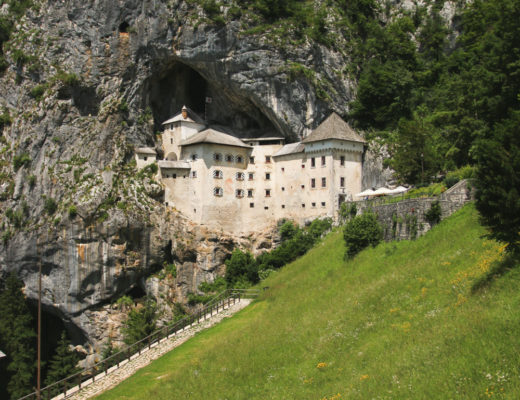 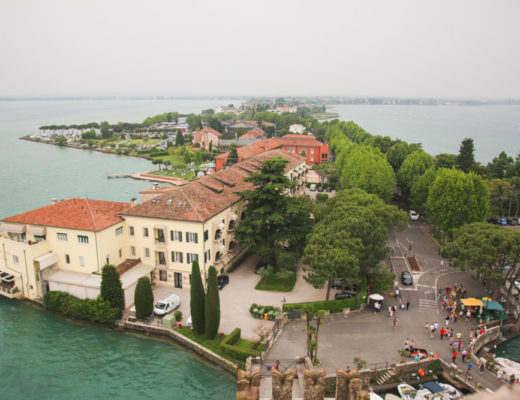