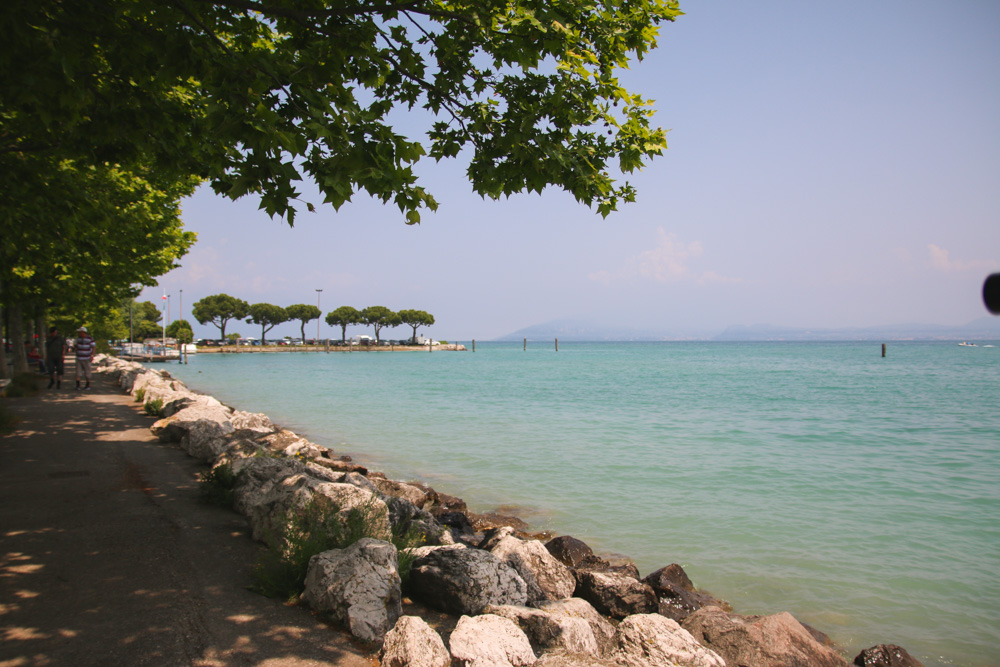 The drive from Bellagio to Lecco was the typical (almost) single lane cliffside/lakeside road with tight bends and speeding cars like what we experienced on the way there. The other roads along the way were normal sized roads, but they’re literally crumbling so it can get a bit bumpy at times until you’re on the highways.

After our time at Lake Como, I wasn’t really too fussed at spending the day at Lake Garda as it hadn’t been what I’d expected and thought Sirmione would be pretty much the same. We debated popping in to the town for an hour or so, having a quick walk around and then catching a train into Venice for the afternoon. Sirmione is located on a peninsular that juts out into the lake, so we headed up there to find parking. There was a queue of cars which were all getting turned away as the carpark was full, but as soon as the attendant saw that we were a campervan, he exclaimed “ahh, camper, camper, come in!” – turns out they have a whole dedicated area of the carpark specifically for campervans  right at the waterfront! 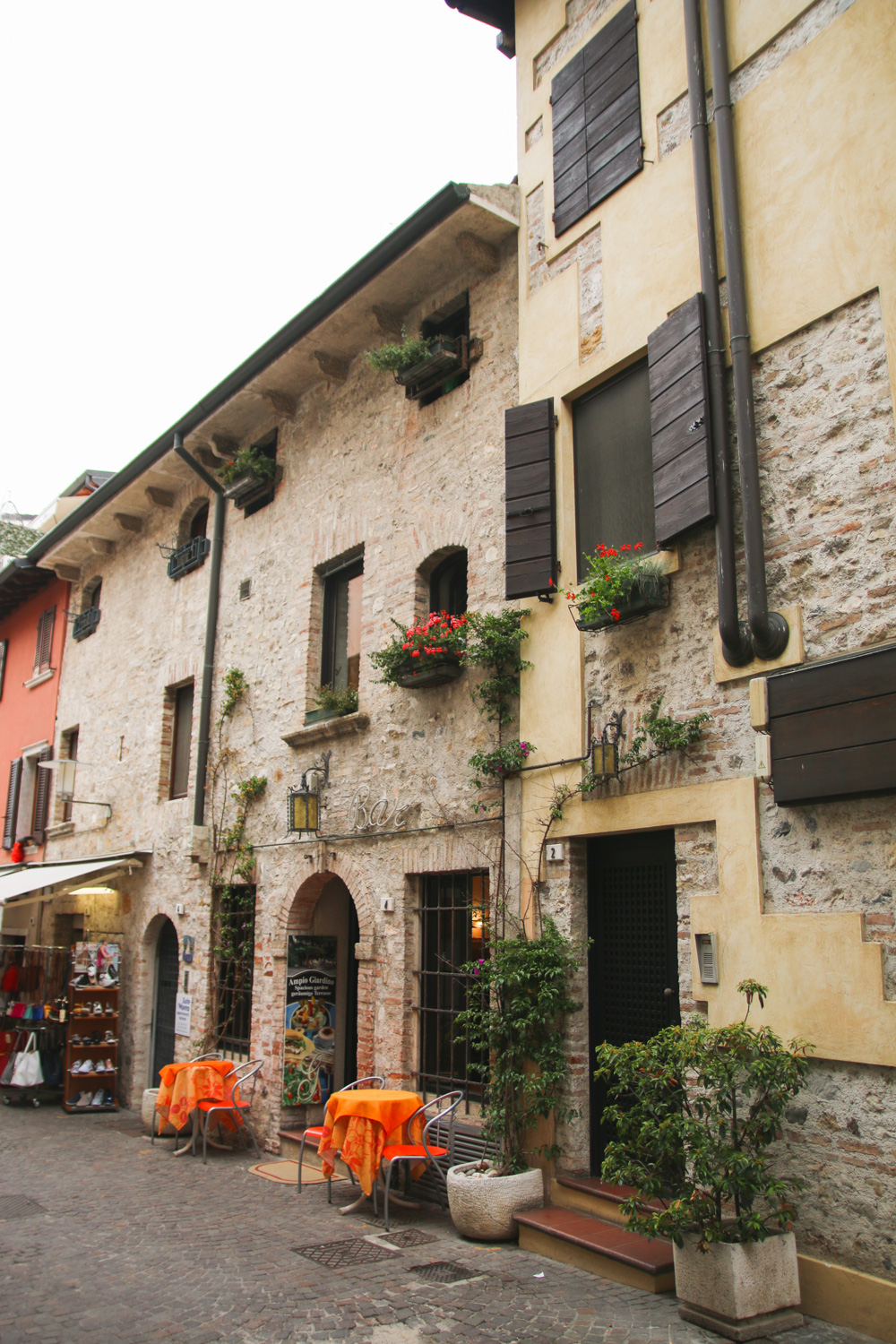 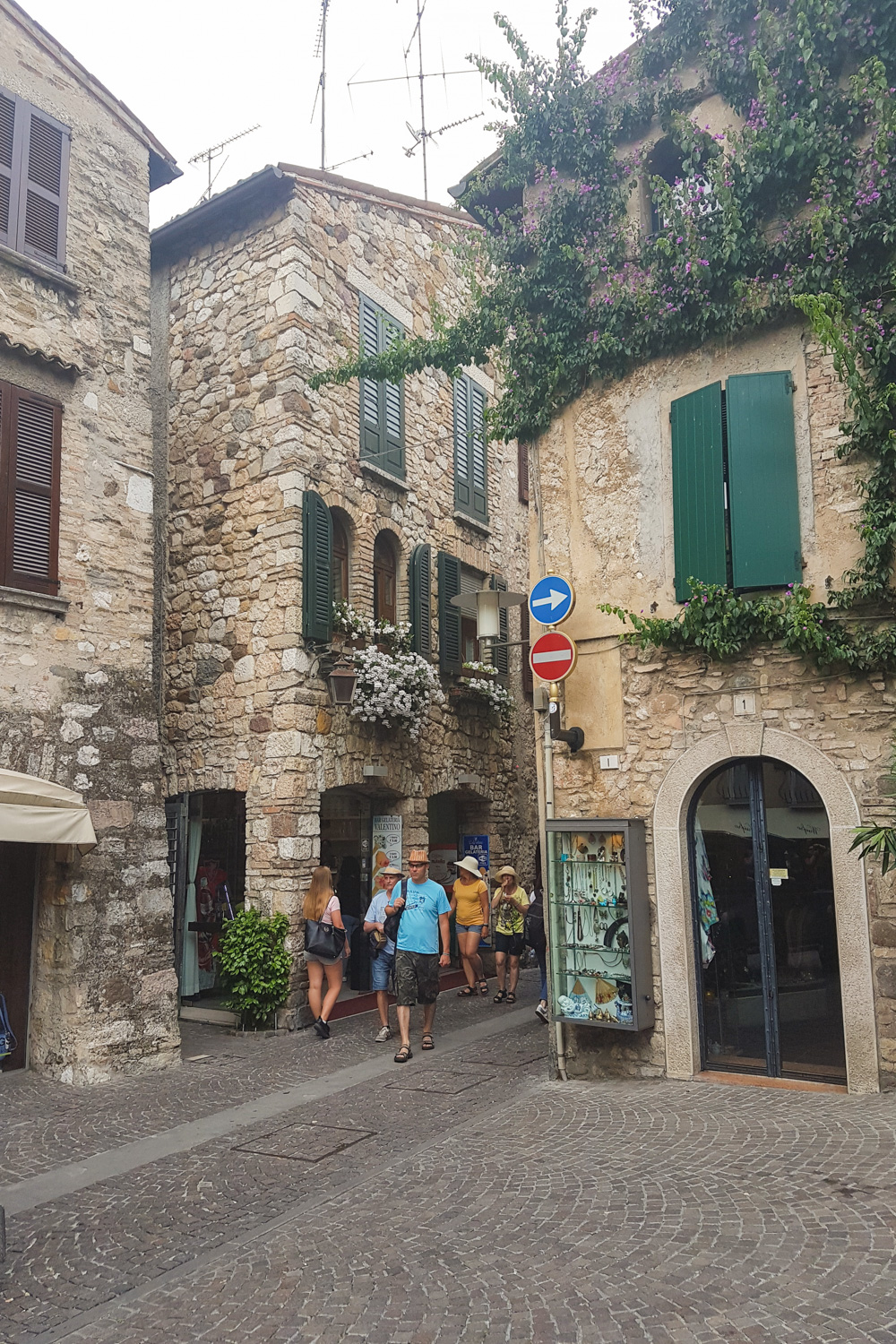 We arrived to clear blue skies, though we were forecast rain and thunderstorms, with amazing views over the lake with a hint of mountains in the disance. Lake Garda is Italy’s largest lake, and it definitely seemed that way while we were there! We had a short walk into town and instantly knew we’d love it there. It’s got that old Italian town vibe to it, with nice alleyways to get lost in and huge piazza type squares filled with restaurants for the tourists. We took a walk along the shoreline thinking we’d just do a quick circle of the peninsular, then head to Venice, but by the time we hit the end of the walkway we knew we’d be staying a lot longer.

There’s some really nice beaches around Sirmione, and the water was so much warmer than at Lake Como. There’s actually some hot springs there too, which helps warm it up a bit – we didn’t realise till we smelled the famous eggy smell as we got nearer. 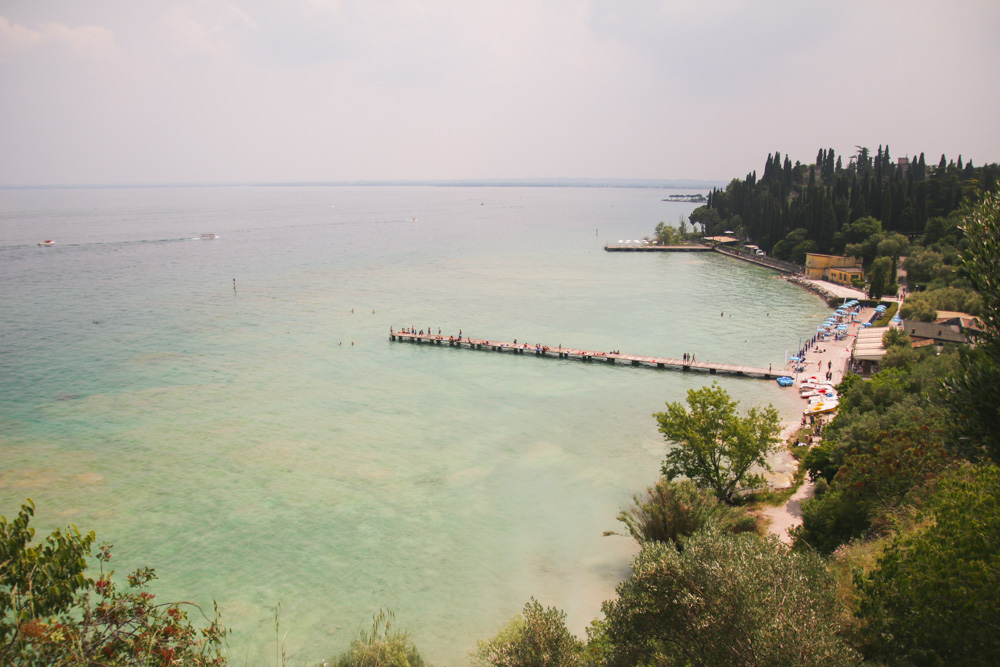 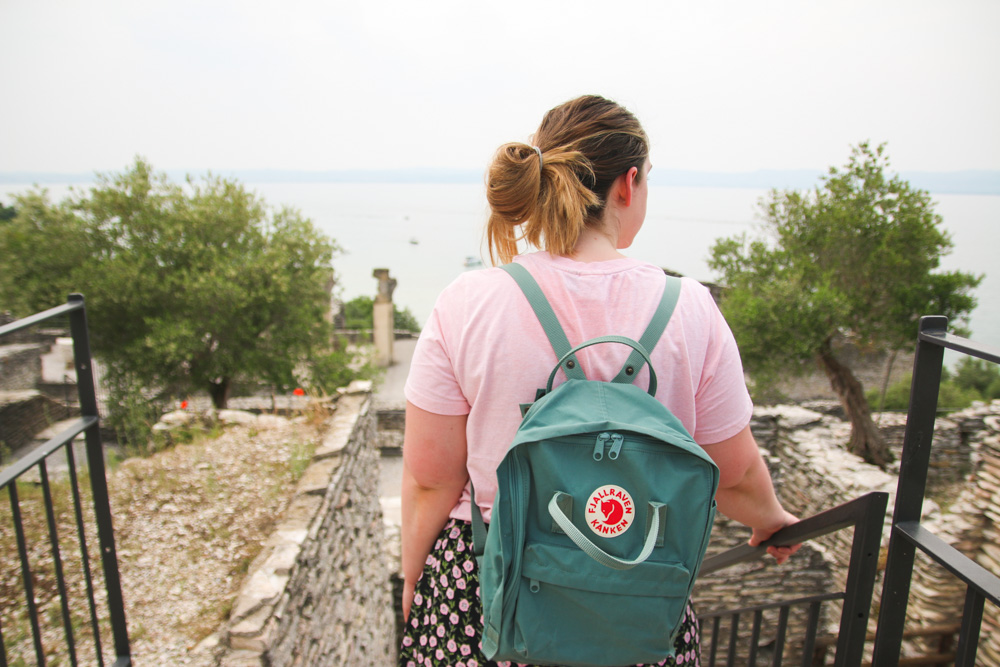 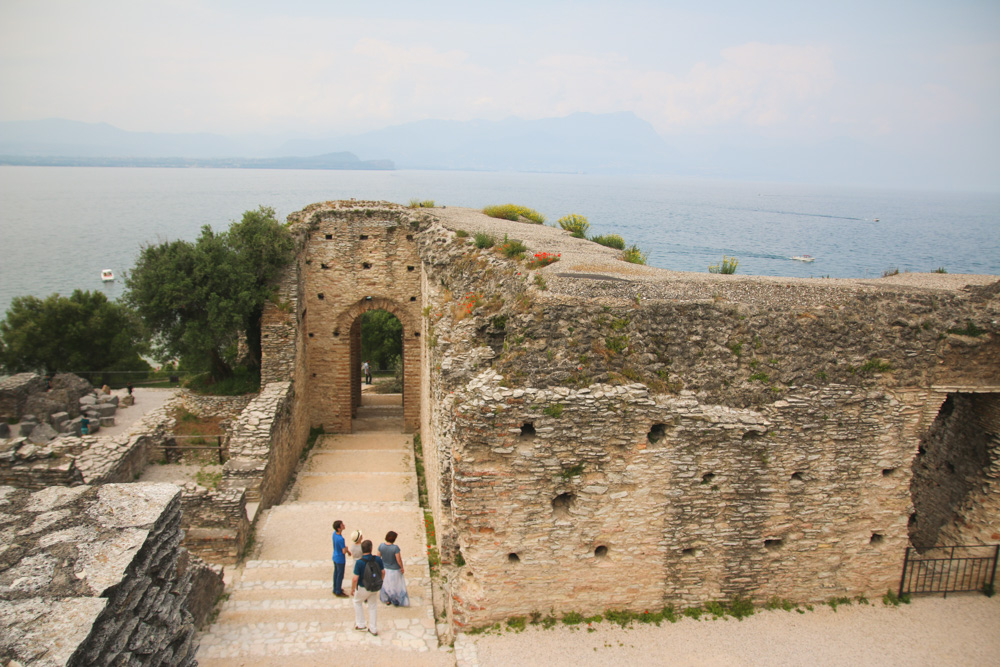 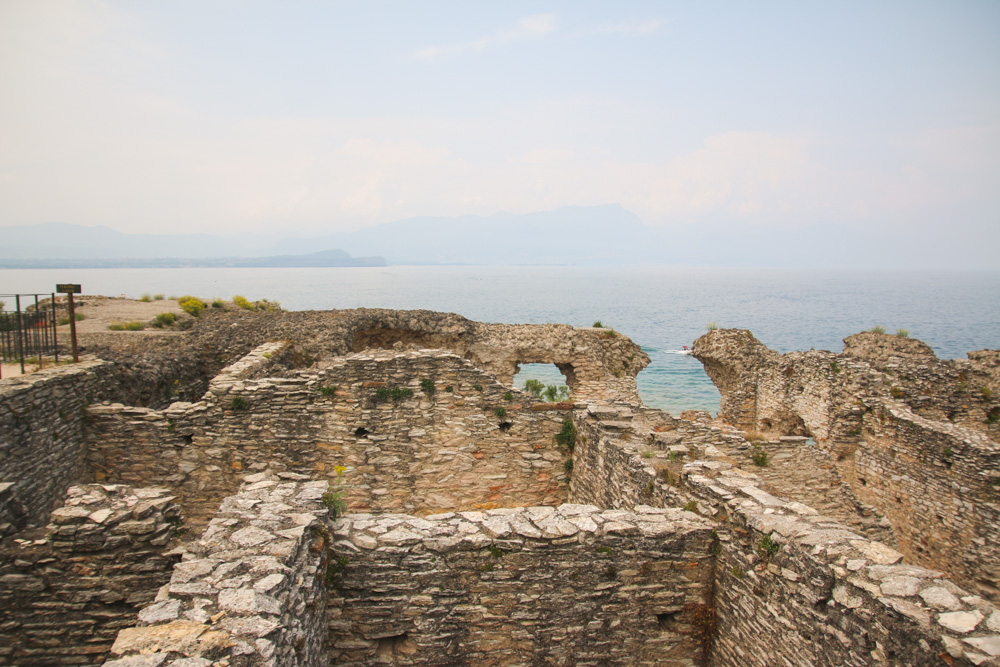 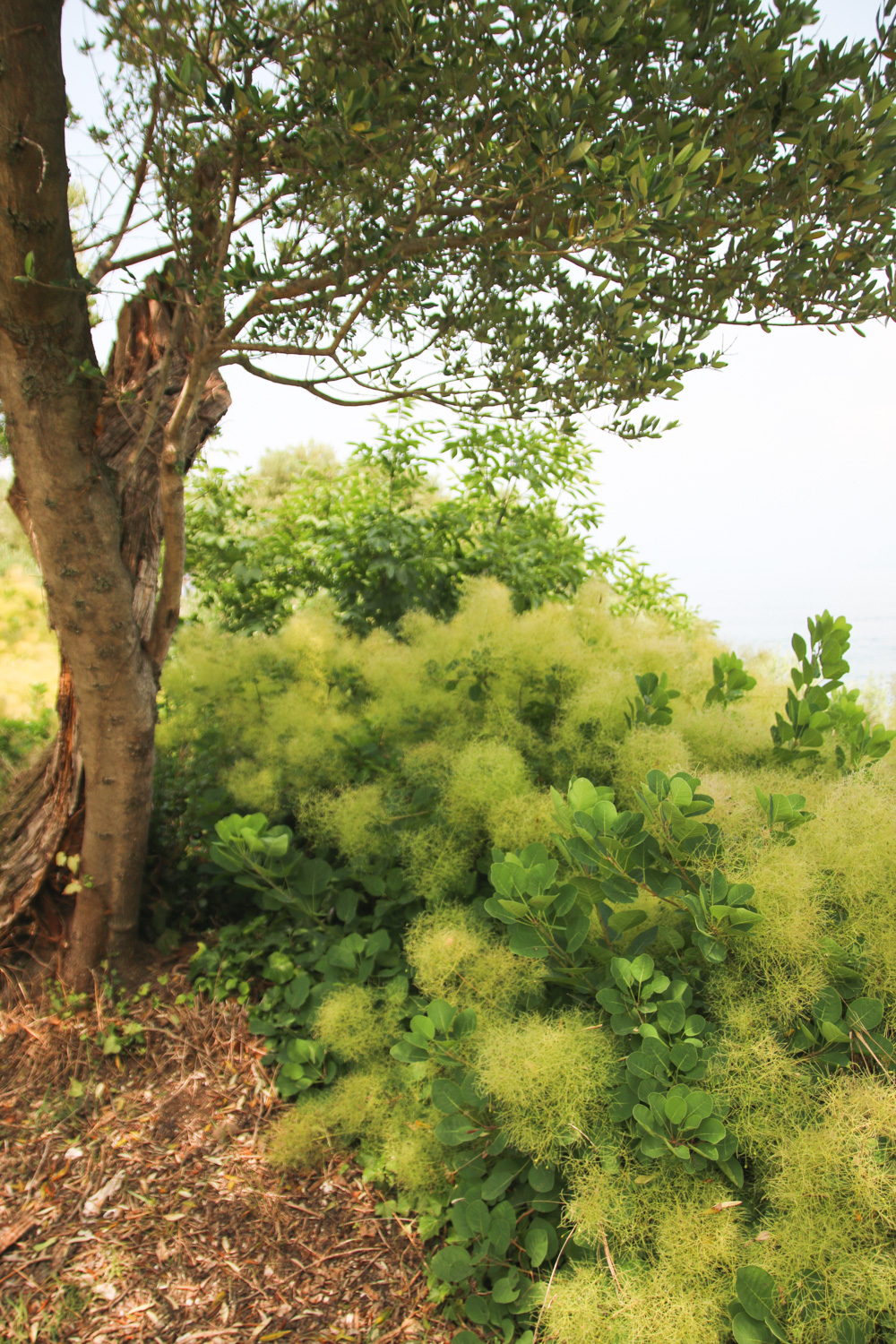 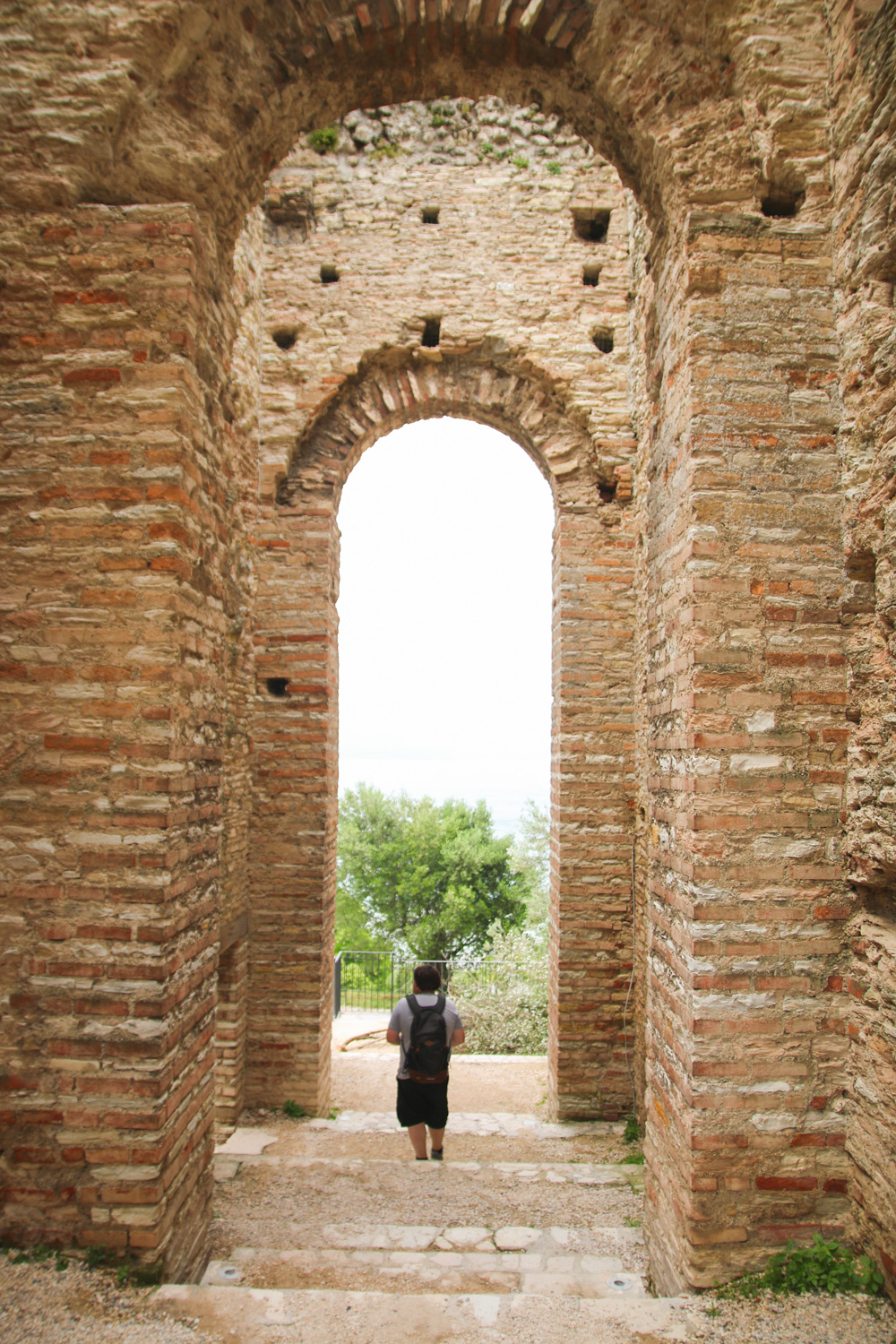 We carried on walking and came across some lovely viewpoints over the lake and beaches, and then found the entrance to Grotte di Catullo. We had no idea what it was, but there was a joint entry ticket to both the Grotto and the Tower (at the main entrance) for €12pp (or €8pp for only the Grotto) so we decided to go see what it was all about, having absolutely no idea what it even was.

Turns out, its a whole massive area of ruins of an ancient Roman Villa that was built between the 1st Century BC and the 1st Century AD. There’s also your typical things like a museum which shows how it would have looked back in the day, and some of the artifacts that were found during the restoration of the Grotto. It also had really nice views across the lake and down to the beaches below. We actually found a bench and just sat there for a good 20 minutes or so watching all the boats around the lake and people swimming. I think it’s definitely worth a stop if you visit Sirmione! 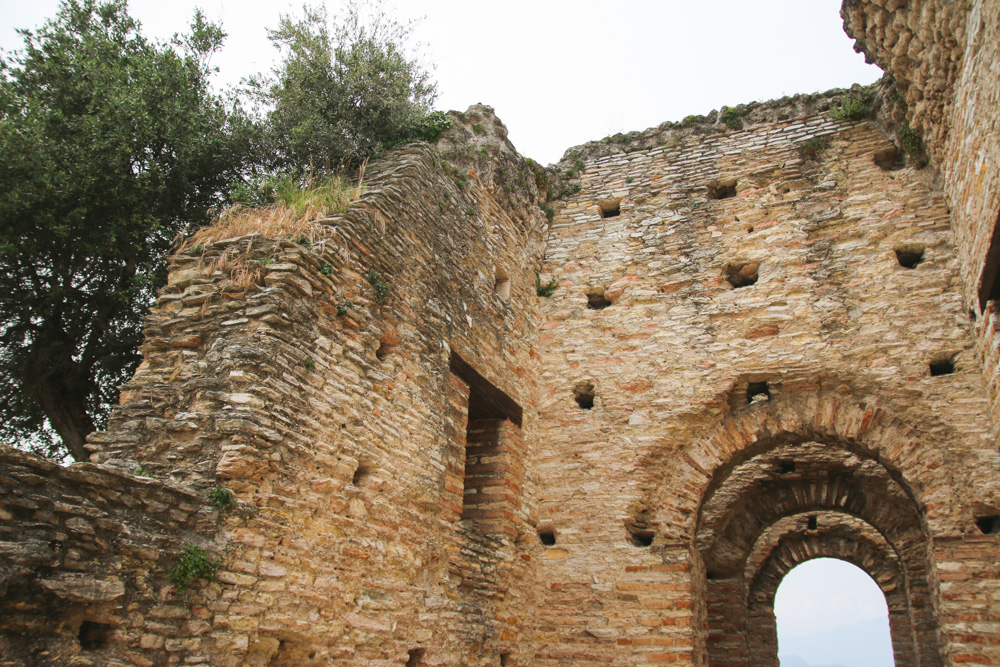 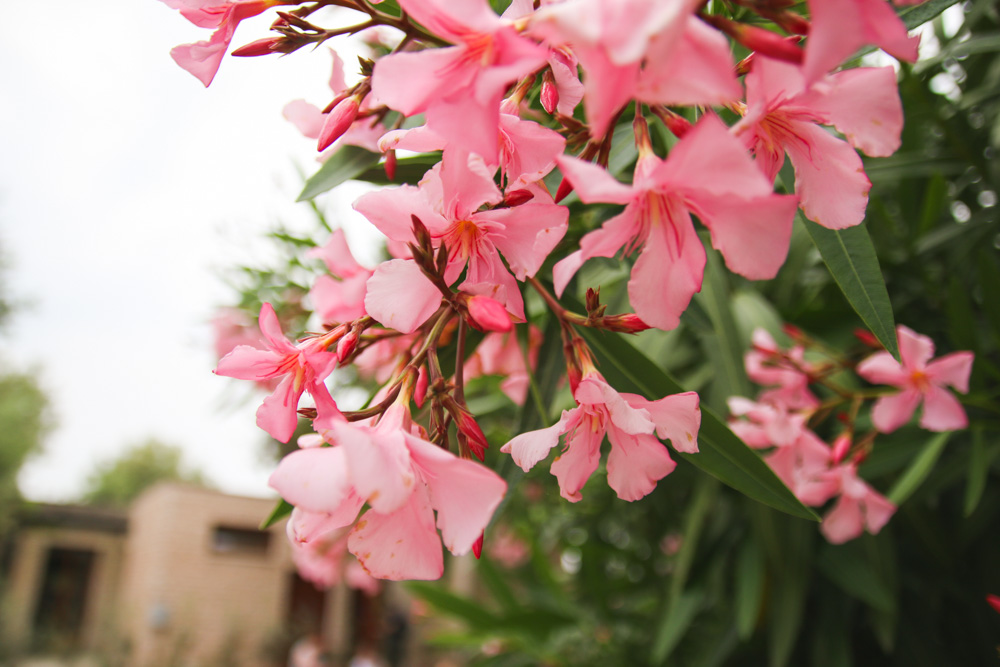 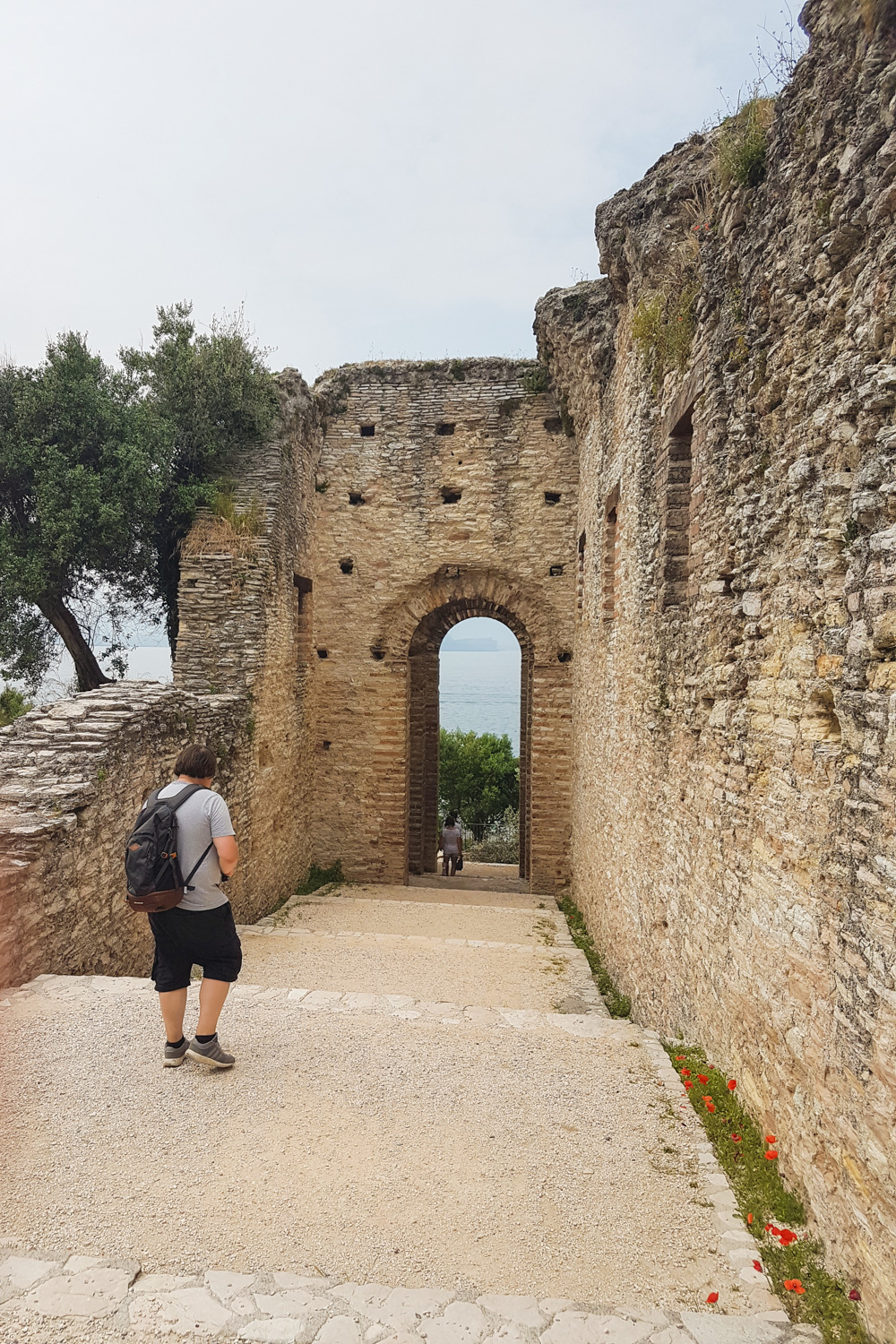 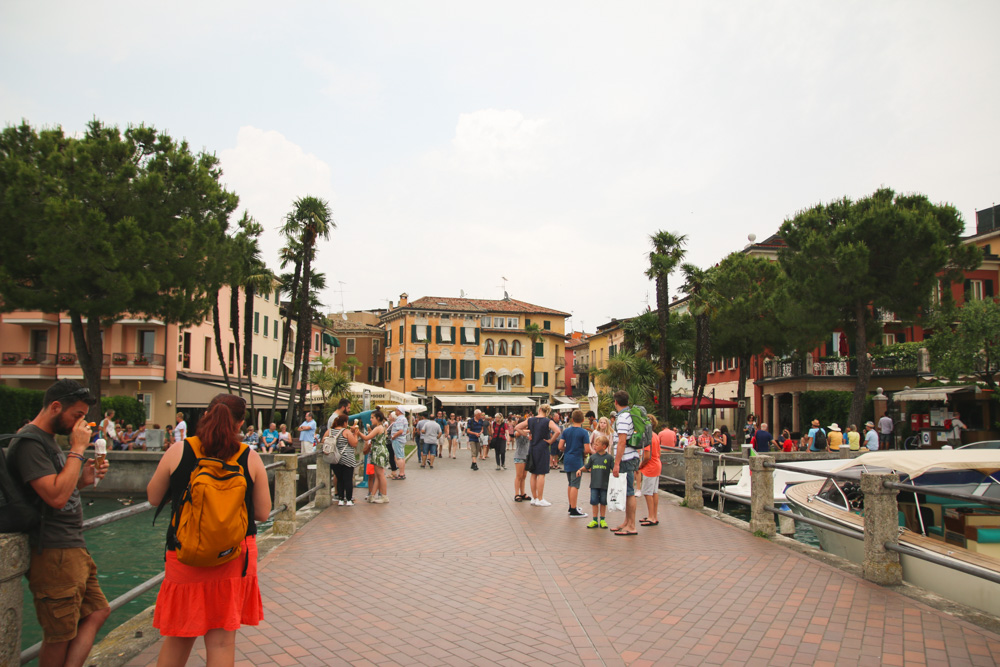 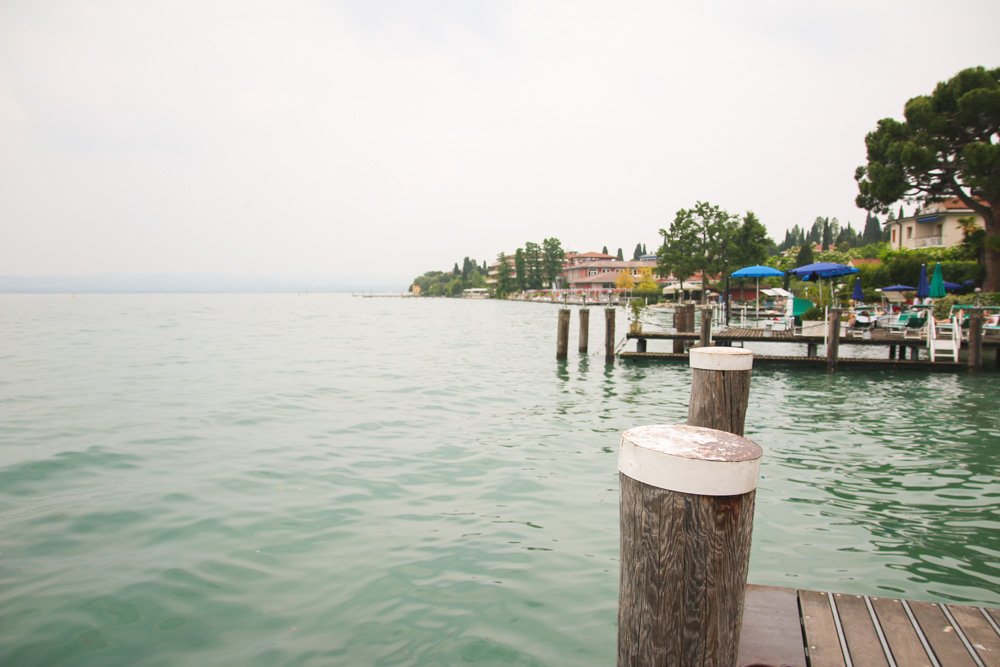 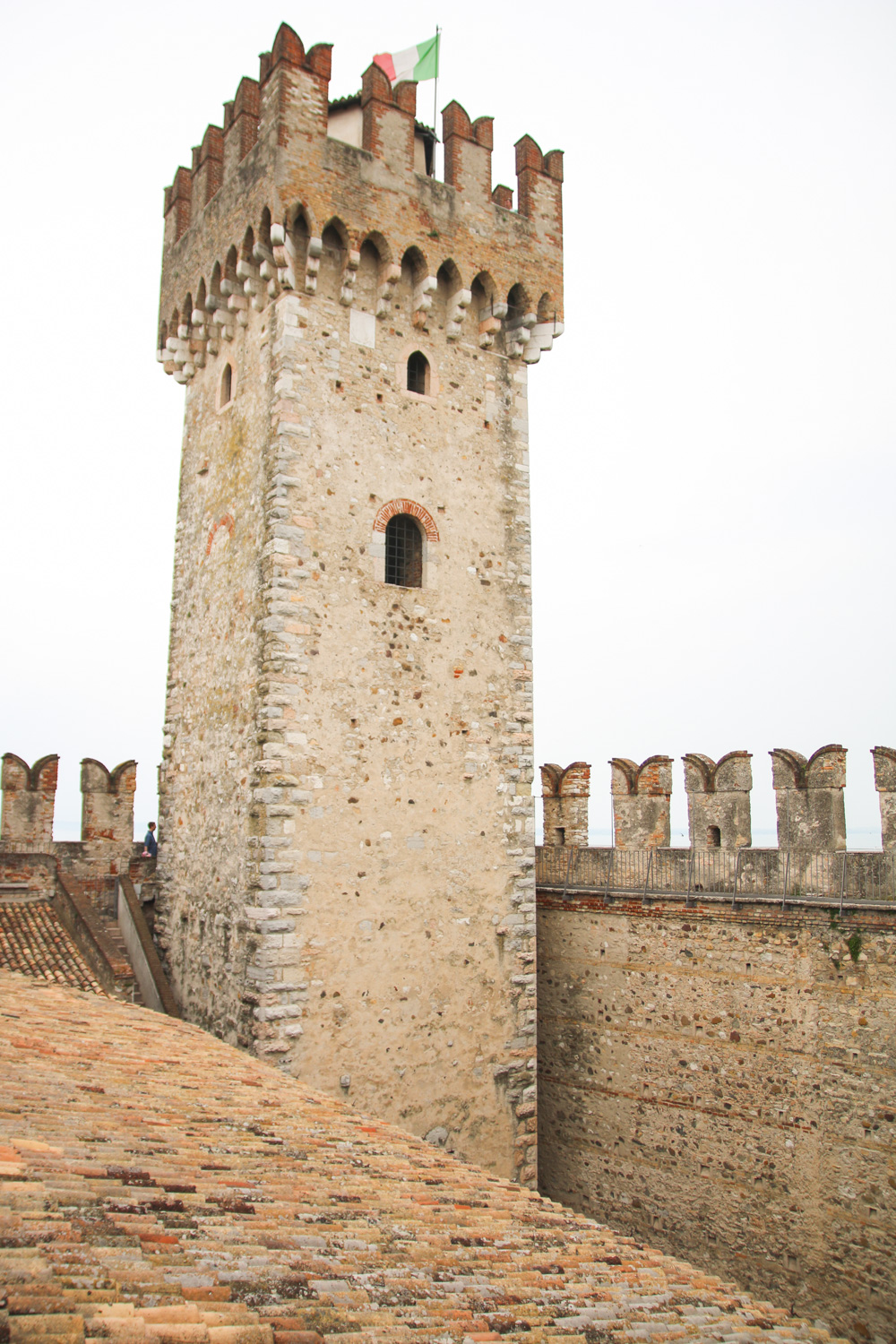 After spending a good hour or two exploring the Grotto, we decided we’d better head back into town as we could see the rainclouds in the distance getting closer and closer, and we didn’t quite fancy being stuck in a thunderstorm. We had a quick wander through the town exploring the streets and the dock area – you can get a boat between the different towns on the lake which we’d have loved to have done if we had more time. Apparently Limone is really nice too. 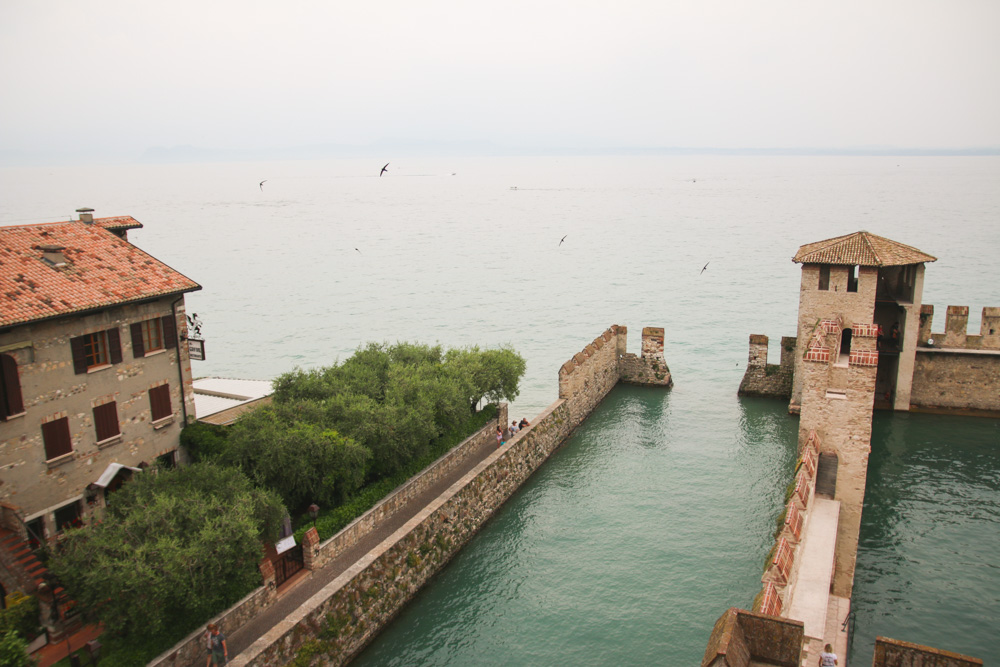 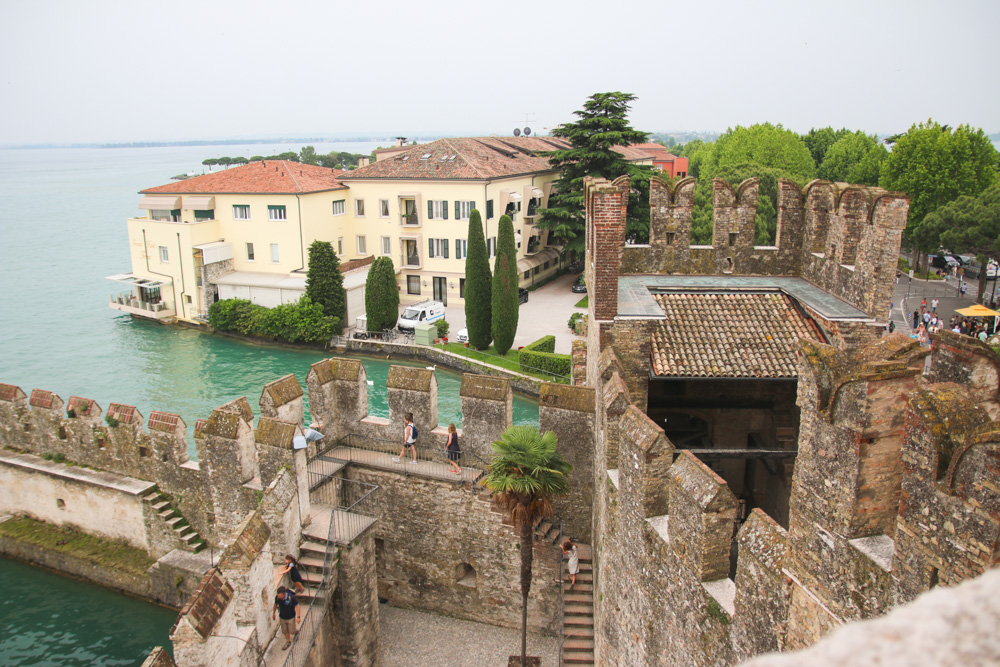 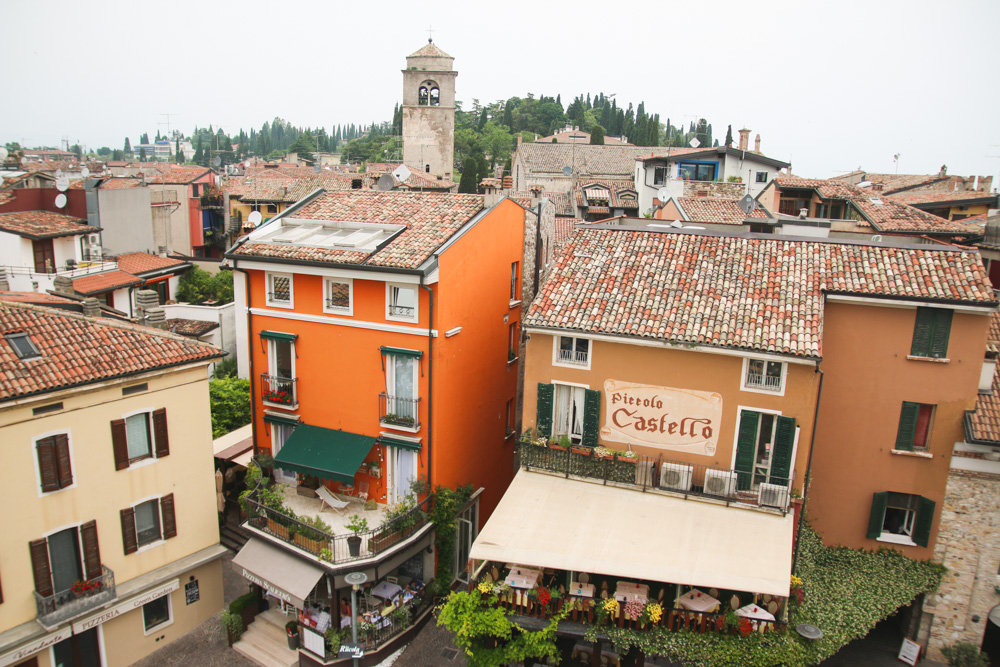 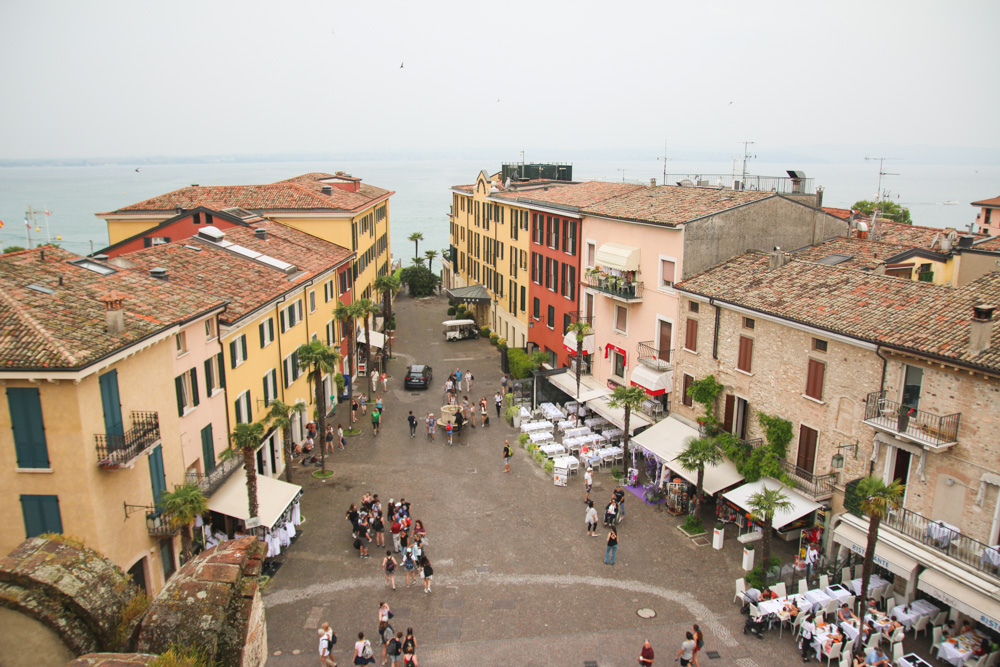 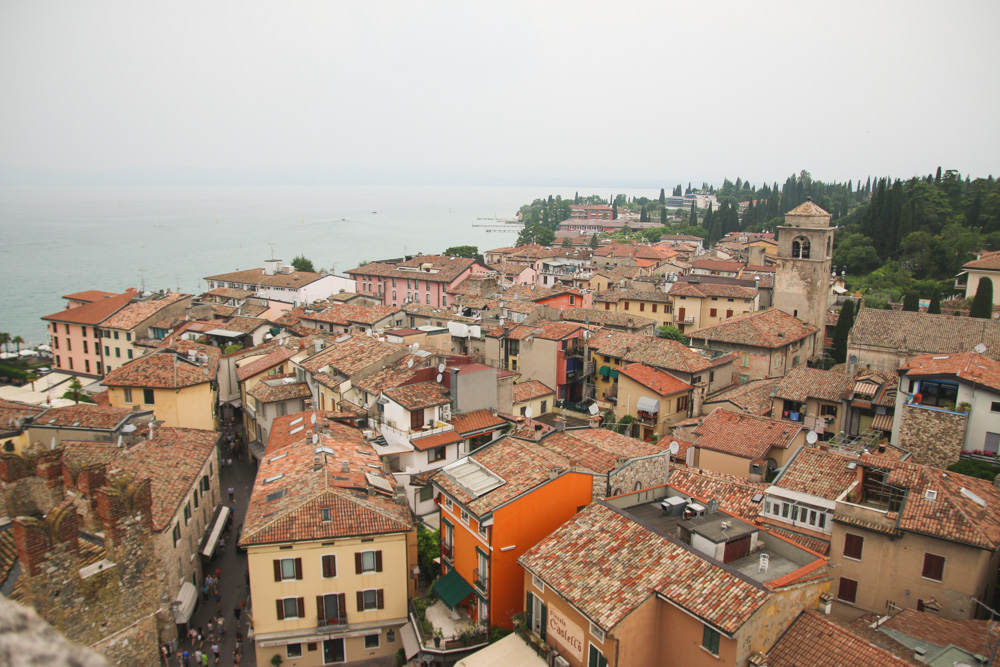 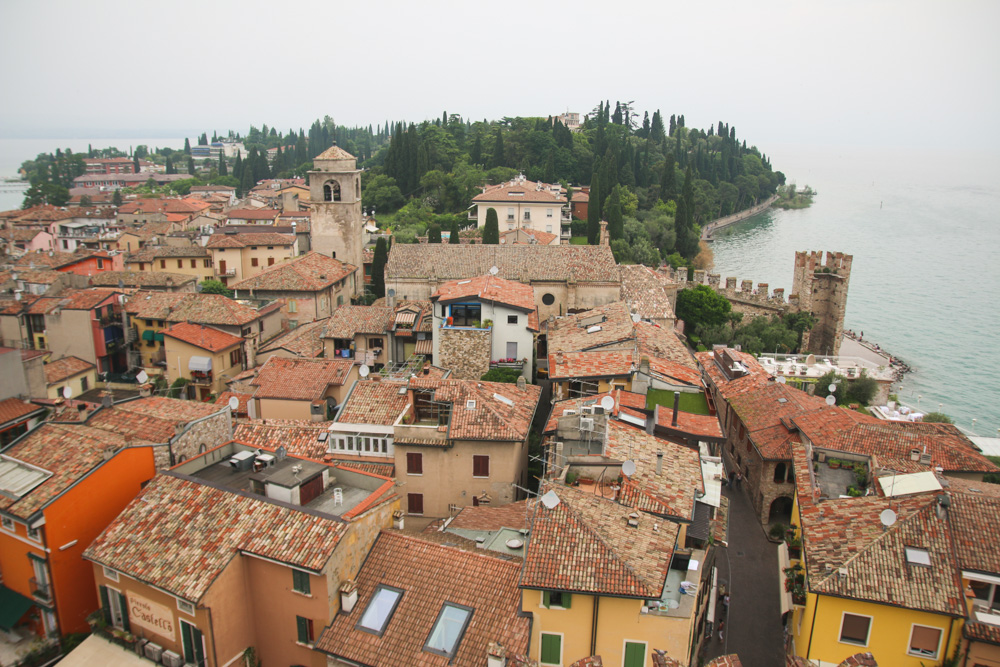 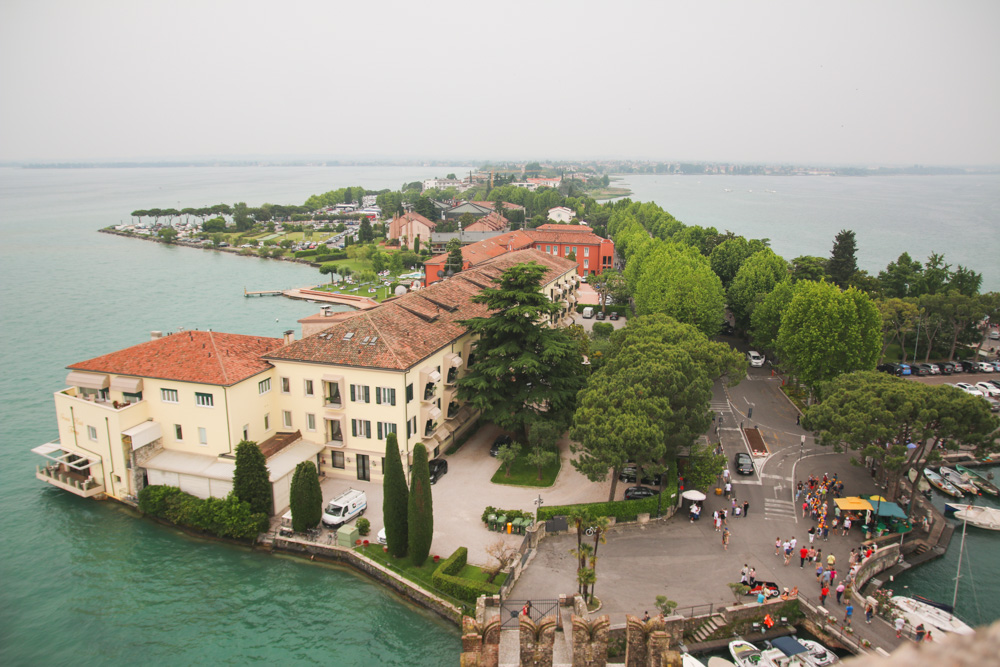 As we bought the joint entrance ticket for the Grotte and the Castle, we headed to the castle which is right at the entrance to the town which had amazing views across the peninsular and back to the mainland. The castle was built in the 13th Century as defense to the peninsular. The tip of the peninsular is actually cut off from the mainland with access via a bridge, which probably would have been a drawbridge back in the day – there wasn’t too much information provided at the Castle so I’m not entirely sure.

The castle also has a moat around it inside the walls of the little island, with a drawbridge to get into the castle, so it’s pretty well sealed off from the mainland, or at least it would have been back in the day.

Afterwards, we headed back to the van, but not before stopping at the fruit stalls outside the old town. We each bought a fruit salad which had some of the most delicious fruit ever, and a fresh lemonade made with lemons almost the same size as my head! They were huge, but the lemonade was SO tasty! We sat by the water for a while and then took the short walk back to the van. 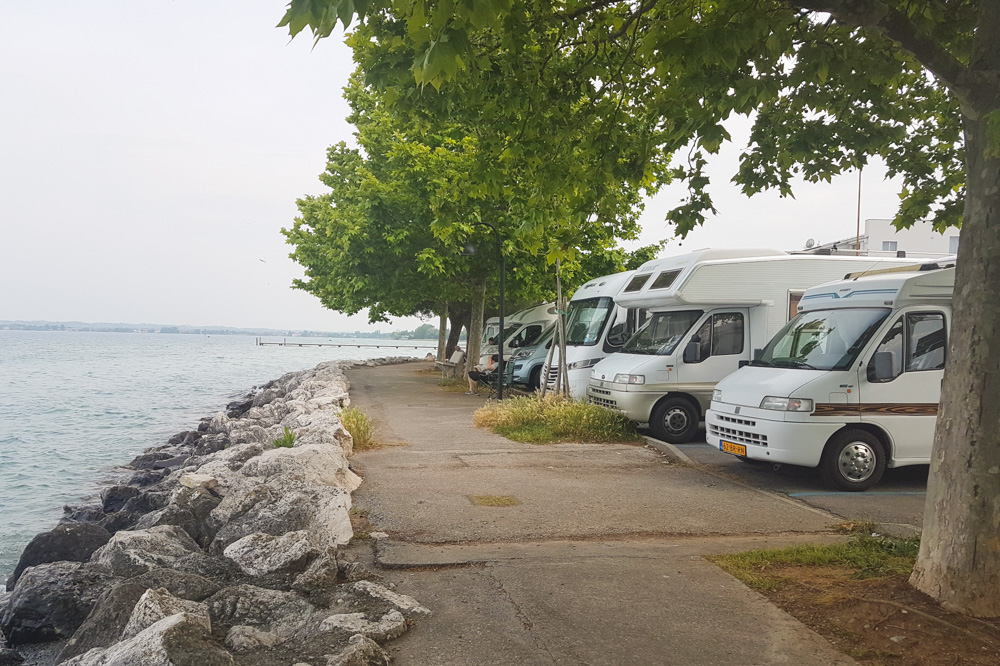 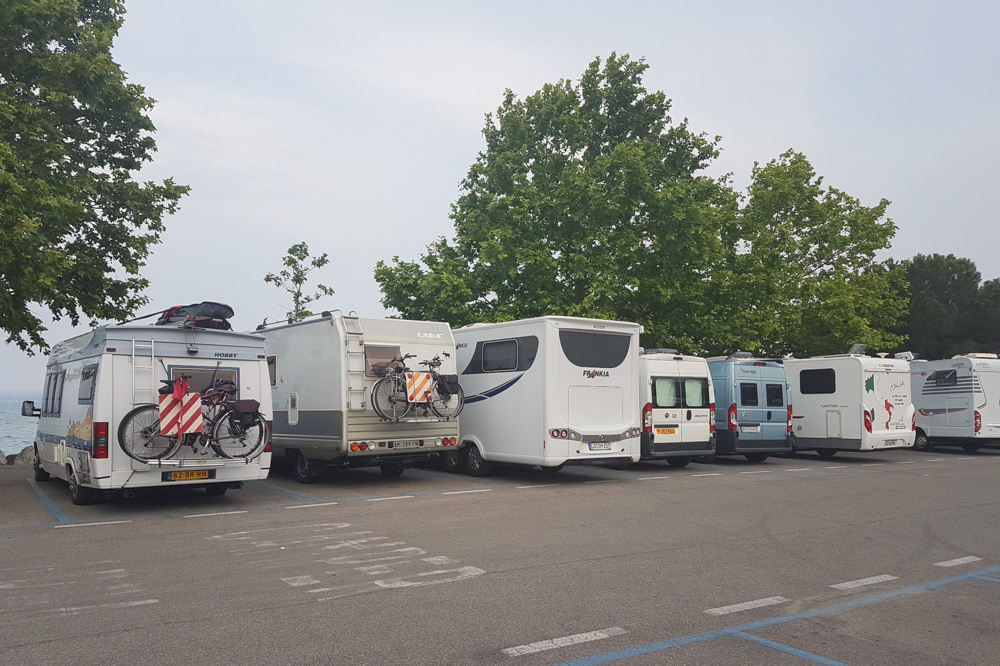 We spent a good amount of time when we arrived in Sirmione scoping out all of the campsites in the area online, but as it’s such a huge tourist area the campsites are more like resorts so they were all coming up super expensive at around €40 per night. When we arrived back at the van, a lot of the other motorhomes looked like they were set up for the night – we checked the park4night app and turns out you can actually stay in the carpark overnight.

We checked the prices and it was €21 for 24 hours, so we decided to stay there the night since it was already going to have cost us around €15 for the days parking there. It as our first night of ‘wild camping’ on the trip – and we were SO glad that we decided to buy that porta potti in Switzerland a couple days before! We got our chairs out and chilled by the water till the sun started setting, cooked dinner and by then the rain had started. It was actually such a nice evening!

They also have facilities to stock up on fresh drinking water, get rid of grey waste and empty your bins in a whole little motorhome section. It was a really nice stay that night, so if you’re looking for somewhere cheap to camp at Lake Garda we loved it there! 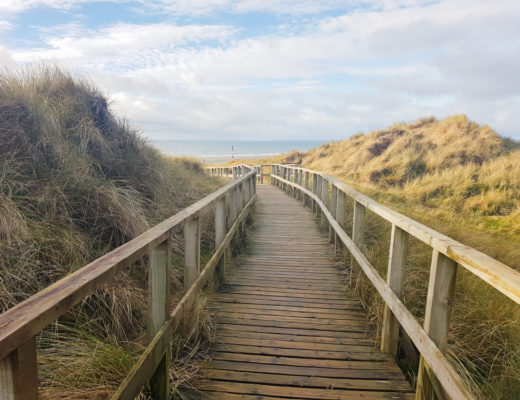 A Weekend of Wild Camping in Wales 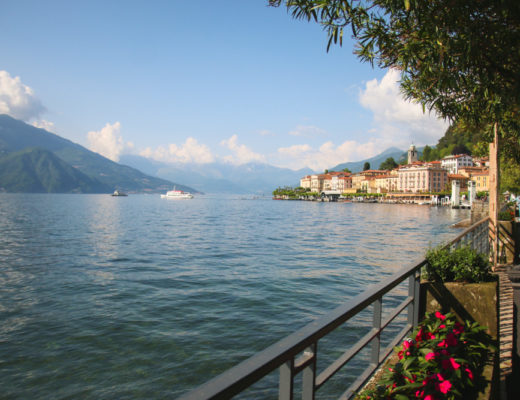 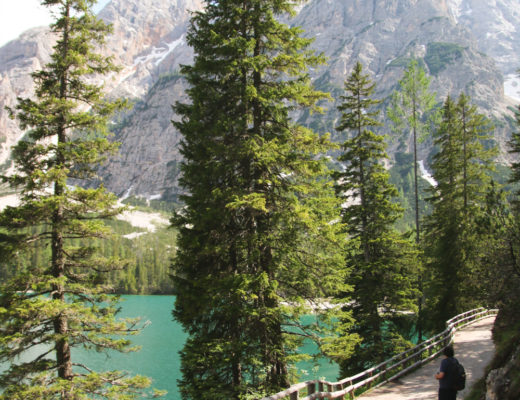